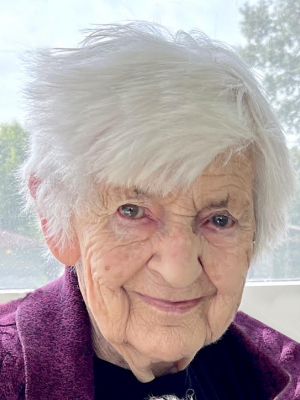 Visitation will be held on October 23rd from 1pm to 2pm at Candlish United Church, 311 Rue des Fondateurs in Kinnears Mills.

Service will be held on October 23rd at 2pm at Candlish United Church, 311 Rue des Fondateurs in Kinnears Mills. Burial to follow at Riverside Memorial Cemetary.

Doris May Clouston, only child of Mary Jones Clouston and Robert Clouston passed away peacefully on October 10, 2021 at age 98. After losing both parents while still a teenager, Doris embraced life on the Stewart farm in St Pierre de Broughton and quickly became a cherished member of the entire extended family. She was predeceased by her Stewart siblings, Mildred Robertson, Dorothy Marlin, Arthur Stewart and Alice Stewart and is mourned by her surviving sisters Lucy Kinghorn and Edna Beattie.

As a child, Doris grew up in Lemesurier, Quebec on her family farm. Surrounded by many sheep, cows and her beloved horses, her love of nature was nurtured . She was deeply rooted in the land, but not confined by it. As a young woman, Doris left for Sherbrooke where she became a published writer and poet. While in Sherbrooke she also worked for the Graham family, keeping close contact with the family over the years.

Doris lived a long life filled with music, love, laughter and plenty of hard work. There was no task she would not tackle with eagerness, whether it involved tending farm animals of preserving local history. She was a longtime supporter of the Megantic Historical Society where her family's "whim" (threshing machine) is among the artifacts illustrating life in days gone by. Doris was instrumental in getting a commemorative plaque for St Matthews Church site in Lemesurier.

A dear friend to many in the community, many generations discovered her love of music, of people, and of a good political debate. Those who knew Doris can testify to her knack of putting everyone at ease in any gathering. She brought out the best in all of us.

The family wishes to thank all the staff at CHSLD Denis Marcotte for their kindness and care and her most special friend Maureen Small, MCDC.

Visitation will be held on October 23rd from 1pm to 2pm, followed by a service at 2pm at Candlish United Church, 311 Rue des Fondateurs in Kinnears Mills. Burial to follow at Riverside Memorial Cemetary.